Been banging away at the cars in my spare time.

Our 968 braking issue turned out to indeed be front warped rotors even though they only had 2000 miles on them.  Lesson learned here is that when common sense and experience tell you something is broken, don’t look past it just because that item has been replaced recently……new parts fail, rebuilt parts fail, new rotors warp, stuff happens.  The calipers had been rebuilt recently thinking it was an issue with the braking, and it may have been…..a caliper could have been hanging up which heated up the rotor on that side causing the new rotor to warp.

Parts finally came in for the 996TT project.  With the car supported and on jackstands, I could go after the transaxle mount and coolant lines.

Supporting the transaxle, you can lower it down and remove the front mount….

Once that coolant leak was cured, a test drive around the block popped up another leak which we had known was a incoming issue.  The passenger and center radiators had a slight weep at the end tanks.  Well you seal up one leak in the coolant system, and the system pressure increases…..guess what happens……..you got it……an increase of leaking of the radiator end caps.  The fan blade on the passenger side auxiliary fan also separated from the motor, which means we will need a new radiator fan on that side as well.  When it rains, it pours.   Well, might as well get all our winter maintenance done before winter sets in, lol.

Also brought in an extremely nice low mileage (under 80k) 951 for its annual maintenance and to diagnose a smoking issue.  Looks like bad turbo seals are getting contagious.   While the car is dusty from being in storage, I assure you, this is one extremely nice 951 with some great upgrades…….. 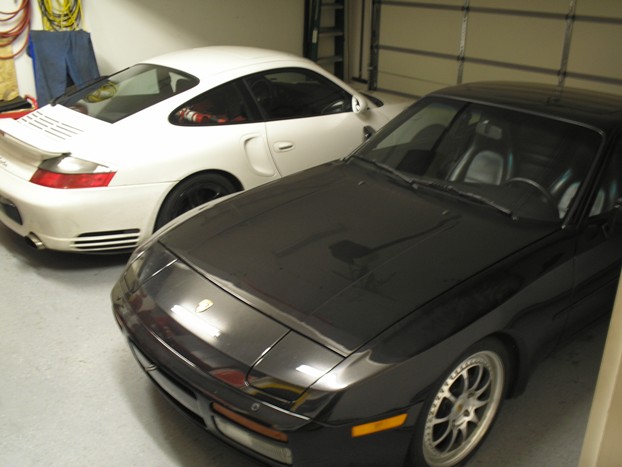