Rockin’ Into The Night

Things keep rolling long here at the shop. I have been backing up on my blogging, so will try and catch up by the weekend.

Not only have I been neglecting the blogging, but I have been neglecting MiniMoo. For those that don’t know MiniMoo (and i’m too lazy to find an actual picture of him), he is the toy hauler 2500HD that has been featured a time or two on the blog before. The 1-3 settings on the interior fan blower for the climate control stopped working a few weeks ago, so we have been driving around on the high settings which isn’t the best for maintaining a constant temp. Typically when this happens, it is due to the fan motor resistor. So I dropped out the bottom part of the dash and pulled out the resistor.

Disconnecting the 2 electrical connectors on the unit and on the fan.

And dropping out the resistor assembly.

And you can see the circuit board is fried.

The new board is slightly different, but works the same. After reassembly, everything is working as it should again!

Meanwhile….back at the shop.
We got the tank back for the 914, reinstalled, pump updated and fired it up….only to find a little leak from the hoses. As with most older cars, you fix one thing, and the next weakest link fails. No problem though, some fresh lines and we were rolling again.

Wes replacing the lines at the tank.

Once we got everything fired up, we discovered a leak in the fuel pressure regulator. We went ahead with replacement on that since fuel isn’t something you want to take a chance on. Drove the car around quite a bit to ensure the issue was fixed and it is running like a champ!

Then it was time to go after the 997C2S. This car will be getting new output shaft seals on the transaxle (still waiting on parts), and a repair to a rattling muffler. Turns out the rattling muffler was not a broken baffle after all, but yet an exhaust tip that was cracked and rattling. A quick fix with the welder and the noise was gone.

Kind of hard to see, but where the chrome section of tip connects to the body was causing a horrendous rattle.

Once that was done, we knocked out the rear brakes on an 85 911. Typically I like to replace the rear pins and brake sensors when doing the brakes, but only the pads were supplied to us, so I made due with reusing the other stuff.

Then we finished up the brakes on the 996TT project: Everything looks big 🙂

And finished up the odometer repair on the white 88 targa.
Unit disassembled:

Ready to remove the gears.

Gears removed so we can get to the bad gear.

And new gears in place 😉

And ready to go 😉

Then Wes knocked out the valve adjustment on the SC project, and I started the PPI and 30k on the 996TT X50 Cab that we will be prepping for sale. Stay tuned on that. 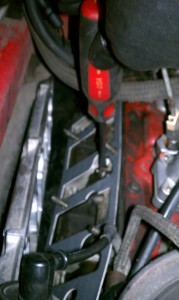 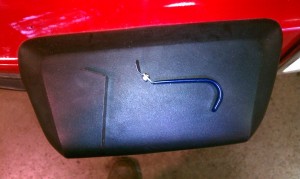 I used Karls SIR tools feeler and one custom manufactured (homemade) one. Typical tappet sets don't have a feeler thin enough to do the SC.

Tip of the Week: We have had 4 cars come in recently with complaints of poor handling or performance. All of them were running around with about 15-20lbs of air in the tires, versus the 34-38lbs that they should be inflated to. Remember to check your tire air pressures every time you fill with gas. We get spoiled with these new cars that tell us when the tires are low, but the old cars don’t do that! 🙂 Plus….your fuel economy will be much better, along with the handling and performance.