One of the major issues of the 993 is clogged secondary air injection ports in the cylinder head which causes a dreaded CEL light.  The thing is, the SAI system is only active on start up, and really is only an emissions thing to prevent excess hydrocarbons on initial startup.  The nice thing, is that the 95’s are OBDI and do not have a CEL light to trigger.  So most likely the majority of 95’s are running around with clogged ports and they don’t even know it….so why not just pull it all off. and clean up the engine bay a little.  Some argue about the cat needing to heat up fast on startup which is aided by the SAI system, and that you might have cat damage long term…..whatever, we’ll pull that crap off too if it gives problems  in 20 years (got to love Kansas!).

If you have a 96 or later, you are stuck with a couple of options if the CEL triggers:

1.  Replace the SAI valve and pray that does it.

2.  Remove the entire exhaust, and run cleaner through the SAI system, hoping to clear the ports

Ok, sorry about the lack of pictures, I was in doing some maintenance on a 95, saw the SAI system, and like a bull I saw red and could only focus on one thing, lol.

I’ll probably edit this a few times as I finish buttoning up the job.

Things that will make your life easier:
1.  Can of Kroil from Kano Labs.  I have been using this stuff for years and it makes PB Blaster look like water.  Order a can online, you will never use anything else.  Soak your fittings overnight and you will thank me (I let the stuff work for 10 minutes and everything came loose easily, no cutting of lines).
2.  Flexible nut drivers.  Everyone should have these anyway.  You can get a set of 6,7,8, and 10mm off ebay for about 20 bucks and they are similar to the Hazet $150 set.  Makes getting to those hose clamps a lot easier.

Procedure
1a.  Remove the airbox and Maf and set aside.
1b.  Remove the 2 rubber hoses attached to the SAI pump and SAI Valve and get those out of the way.
2.  Remove the throttle body intake boot (disconnect associated electrical connector, ISV valve, etc.  You will have to disconnect the breather lines on the passenger side firewall (2) as they are attached to the intake boot (well the big one is not, that is the breather to the engine case…..just feed that line through the loop on the intake boot and remove the boot.  Then actually you can remove the breather hose from the engine (1 hose clamp).
3.  For the SAI pump.  Don’t try and remove it attached to the metal bracket, remove the 3 10mm nuts holding it to the bracket, remove the vacuum line, electrical connectors, etc and pull it out the passenger side.  There is no need to remove any intakes or anything else.  This is done by feel, but very easy.  For the lower rear nut, you have to remove that breather hose for access (step 2).  Now, remember, the breather hose is off, there is a hole in your engine, lol.  You are removing 3 nuts…..be very careful.
4.  Once that is out of the way, you can easily access the 3 10mm bolts holding the mounting bracket in place and remove.  Again, make sure to mind the bolts as there is still an open breather port.  One that stuff is out of the way, either reinstall your breather hose, or lay a rag over the hole.  Don’t want anything finding it’s way in there.   Now, 2 of those bolts also held on your breather plate, so you need to install them back in the breather plate.  Actually, i used some slightly shorter bolts.
5.  Now for the SAI valve assembly.  You’ve already soaked all the fittings in Kroil over night remember?  For the passenger side cam housing fitting.  Remove the fuel rail:  2 5mm allens, and disconnect the rear fuel line fitting at the rail (17mm and a 19mm IIRC).  Pull the rail and injectors out and just swing it up out of the way for now (good time to replace injector seals).  Now you can get a 17mm wrench on the fitting, not much room, but enough to pop it loose.  Unscrew that all the way.
6.  On to the driver’s side.  The key here, is to remove the 6mm allen holding the ground strap to the engine found under the fuel rail near the cam housing SAI line.  It is hard to get on the fitting other wise as your wrench is jammed against the allen bolt.  Once that is removed, then a 17mm wrench fits right on…break it loose and unscrew.
7.  For the SAI valve housing:  2 13mm bolts up top with nuts on the bottom side of the case by the oil filter.  I unscrewed one and the nut fell off the bottom side.  The 2nd one i broke loose, and the nut spun, so i just left my ratchet attached up top and got underneath and unscrewed the nut.  The ratchet will eventually push against something and keep it from turning so you can remove the nut on the bottom.  Then remove the 10mm bolts up top, and pull the whole assembly out of the car.
8.  Install your patrick motorsport plugs, plug the one disconnected vacuum line (you can pull it out of the 4 way connector and plug a screw in the 4 way.
9.  Find a rubber plug for your airbox where the previous hose was. 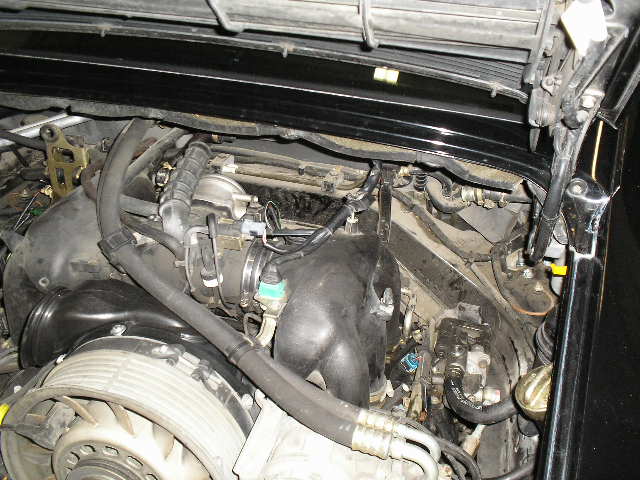 This is the breather plate, you can see the port where the hose was attached, and the 2 empty bolt holes where the mounting bracket was attached…..remember to reinstall bolts in those holes. 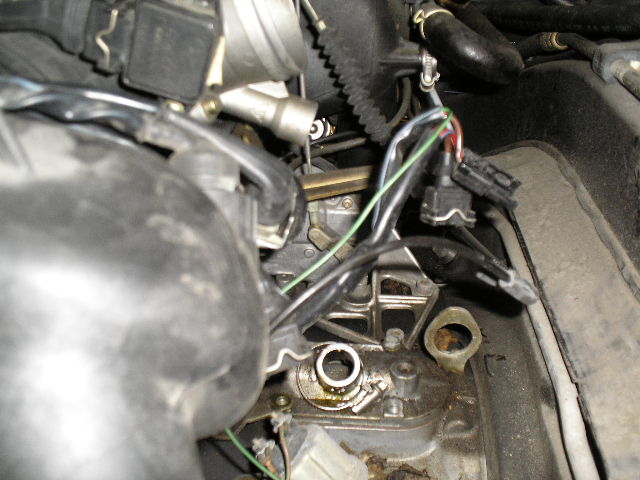 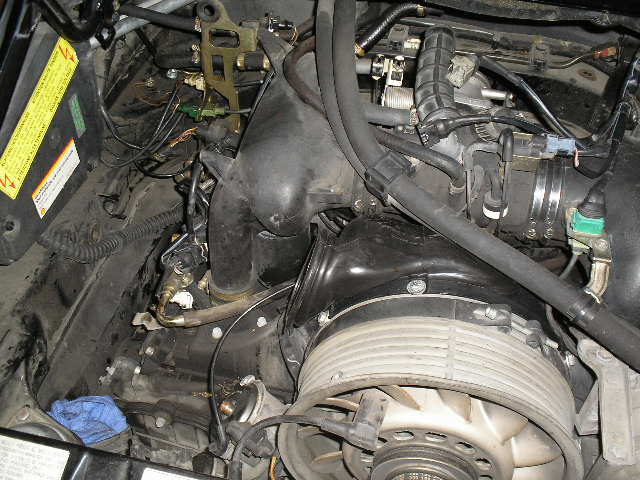 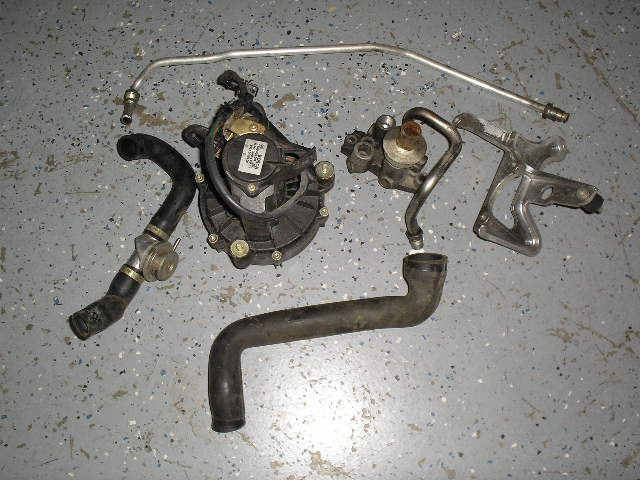 I have a 95 993 cab and was going to remove the sai system. With this job I couldn’t tell what you use to block off open ports after removing the system? A large bolt for the valve threads? Thanks and I love your site! I almost bought that 87 cab you have on your blog a few years back you worked on (massive oil leaks etc) But he wrecked it on the way out to meet me!