This is a bit off of our usual blog but I know the guys on the jag forums will want to see this and it is TONS easier to do it here and shoot them a link so here goes..

XJS started diving to the right under braking.  Up on the rack we find there is no braking going on at the left front.  First step is to attempt to bleed the brakes, bearing in mind the process for bleeding the abs equipped XJS fronts.  We got nothing.  Not a drop of fluid.  We tried pressure bleed, vacuum bleed, traditional two-man bleed.  We even tried two-person manual bleed with the pressure bleeder and vac bleeder in place.  Nothing.  All the rest of the system was a-ok.

I couldn’t find a pin-out of the connector at the solenoids but a quick test with the DVOM showed the seven pin is a common ground and six powers to each of the solenoids.

We had two that were dead. 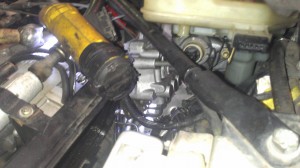 So disconnect your lines and unbolt that block…. 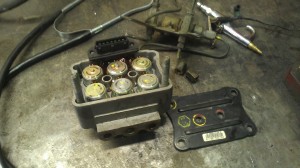 When it is out you can pull the cover…. 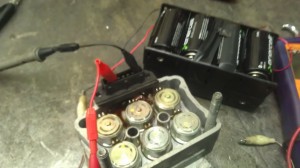 …and verify which solenoids are working. 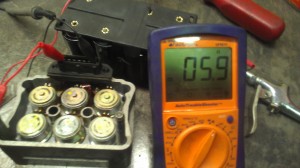 Here a dead one shows 6 ohms 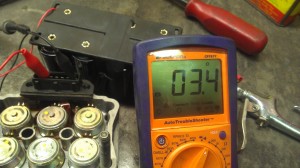 While a good one is at 3 ohms.  If I had known this from the start a quick check at the connector would have told me what my issue was.   Hopefully this saves someone some time.

So at this point you have options.  One way is to change the solenoids.  Another is to buy the whole assy from a breaker.  I found that even used the prices were very high so I chose option 3.   I bought a more affordable ATE ABS/master cylinder unit from a  1988-94 XJ6.  The block must be removed from the XJ6 master and I changed the faceplates.  It looked like the spacers on the newer unit would have been ok but since all was out, why not go back to what was in the car.  You must also remove the locator tabs from the newer 7-pin connector.  Even though the pinout is the same for some reason the locators are different. 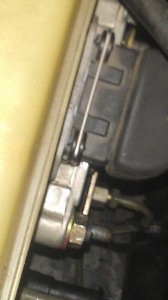 The plug snaps right in securely after the block is re-installed on the master and after a bleed we have awesome brakes for $75.00 and some fluid.  Woo-Hoo!