So this is turning into Jag month.  Today we have an XKR that the door opens well, but something is amiss when closing.  We found that while the first microswitch in the door is working when the handle is lifted and the door is opened.  The window drops about a half inch like it should.  But when the handle is released the window returns to the full closed position.  Then when you shut the door the glass catches the weatherstrip and the convertible top, “popping” closed in a very ugly fashion that looks like glass could shatter.  So off comes the door panel.  Water gets to the latch and kills this switch, here you could see the rust and corrosion as soon as the door panel was pulled. 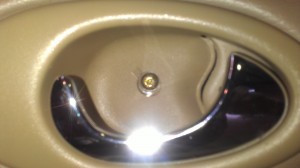 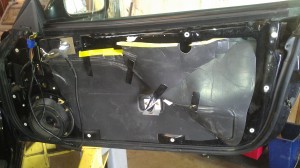 The white holes are where to find all the little retaining push-ins that secure the panel.

Once the panel is off you can remove the latch.  One srew at the top and two at the bottom will pull the bar that is in your way and you can release the ball-and-socket joint on the latch, pull the three fastners from the outside and pop the piece out. 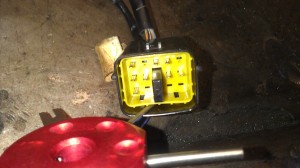 This is the electrical connector, lift up by the tabs and it slides right out. 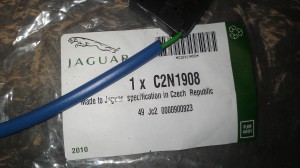 I called our local Jaguar dealer to order this switch.  I was told Jag doesn’t offer it, you have to buy the whole latch at one billion dollars wholesale (or something like that.)  Those guys really drive me nuts.  Here it is from Jagbits.  Part # on the bag if you need it. 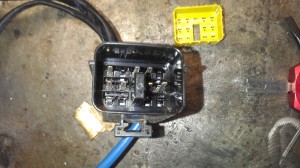 Follow your wires over the the connector.  Lift the tab on top of the connector up and pull the pin out of the back, then slide the new connector in until it “snaps” into place.

Little bosses or tits on the switch hold it in the latch.  Pull the dead switch out and push the new into its place.

If you connect the battery and turn the key on the window should now drop since there is no pin against the latch.

Put the latch back, bar back, panel back, and have one of William Bass’s pale ales.  You are done.

Many thanks the information is really useful. I didn’t realise that the switch was available desperately ? I will try these guys if I am unable to locate one in the UK many thanks regards Martyn

My apologies it’s been a long week!!! I have just realised that this part IS available in the UK as suggested thanks again regards Martyn