If the Nasty Ass Honey Badger were a race car, this is what he would look like. If you don’t about the Honey Badger, you should look it up on youtube by Randall (probably nsfw due to language, unless you work someplace like RennsportKC where anything goes). 2.9L of extremely hot motor. Hot cams, flowed heads, big displacement motor, Electromotive twin plug DFU’s, and some nasty ass PMO carbs to fuel it all!

Car had undergone a fresh motor build from Cox Motorsports awhile back, but sat for about 6 months after it died on the owner when it was idling in his driveway for an excessive period of time. One thing about hot race motors is they aren’t meant for idling for more than a few minutes at a time as they tend to foul the plugs out.

We aren’t sure which came first, the chicken or the egg, but the Electromotive DFU’s fire off a custom crank sensor (no distributor) for spark timing. The sensor had gone bad, which may have caused the car to die, then excessive cranking fouled the plugs, or vis-versa. Who knows. Point is, the car wouldn’t start. We pulled it out of the storage unit and hauled it up to the shop to go through it. After replacing the crank sensor, I pulled the plugs and they were fouled, so we put in new plugs. It was still acting like it was out of time and wouldn’t start. Went through the ignition system and everything seemed right. Finally, we broke down and I pulled the carbs off so Wes could go through them. Turns out there were varnished up, the floats had not been set properly, and were generally out of adjustment.

Breaking down the carbs off the motor. Not sure if Wes took any pictures of them apart, but after putting them back together with new settings, some fresh 100 in the tank, and we had a running car! 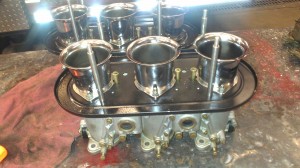 These PMOs are absolute works of art! 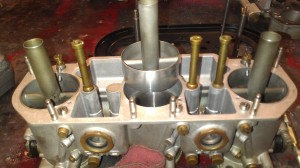 Nothing sounds like a carb’d 911 with headers leading into trumpets. WOW.