No not any Porsche content here, but rather another daily driver.  Buddy dropped off his wife’s FWD Lexus RX330 so we could put in new struts while she was out of town.  The rear right was leaking which is a fairly common issue in the vehicles I guess.  Couldn’t be that hard right……. 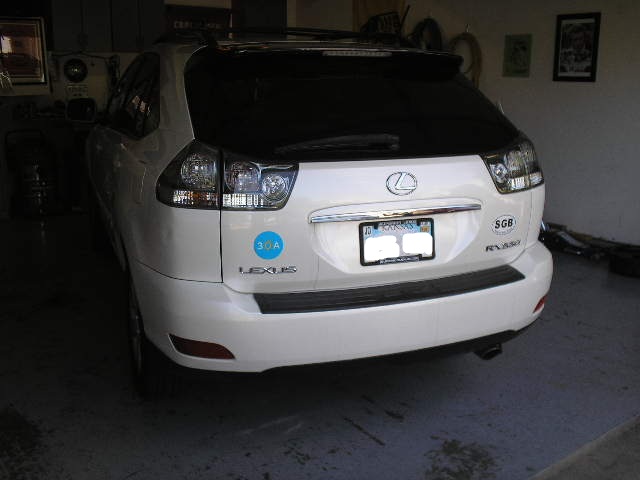 First up, access the rear upper strut mounting points. Disappointed we didn’t have to pull the rear seat as I was hungry and looking forward to stale french fries….or possibly a chicken nugget.  I love french fries.  A simple cover pops off and 3 nuts inside.  Have a magnet ready to catch the nuts.  If you drop one, then you get to figure out how to dissasemble the rear compartment trays…..not that I had to do that or anything……What I can’t figure out is where is the beach in Kansas?  Because that sand came from somewhere…… 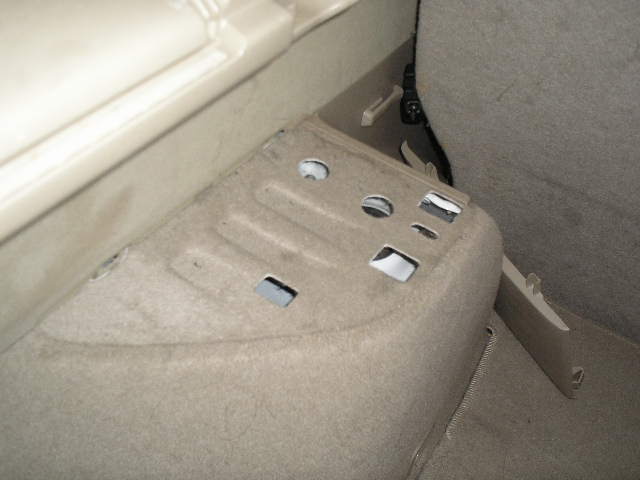 Tackling the driver’s rear strut. Taking the struts out is really extremly simple. 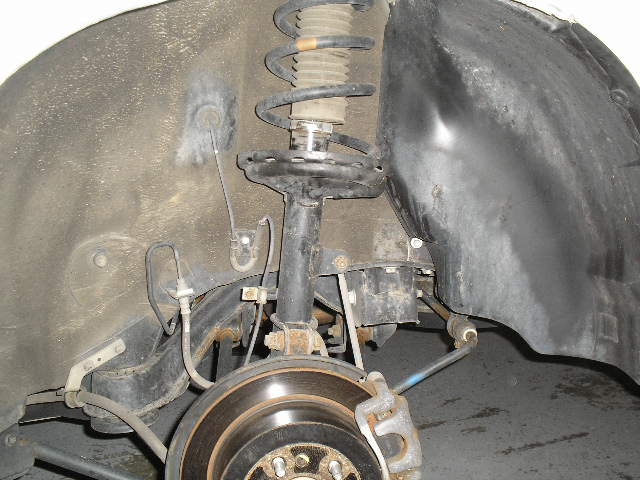 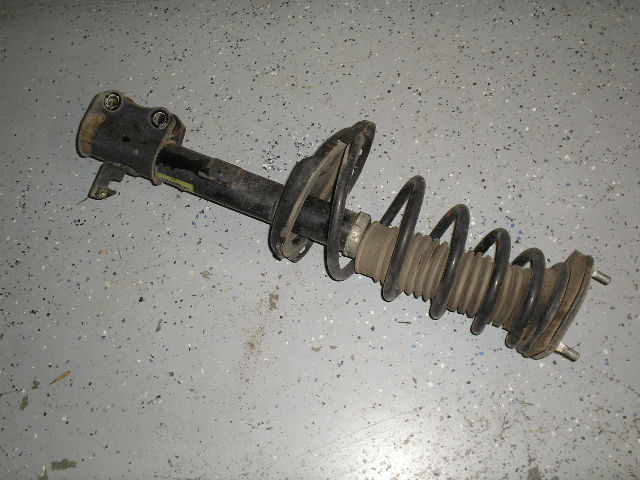 Crap, that doesn’t look good. Tim dropped off his wife’s car that she has owned for 7 years since new, and I decided to wave my magical wand make it an AWD. Can’t beat that right? Seriously, 1 strut appears to be different on the FWD versus the AWD models, and that appears to be the driver’s rear strut. This makes absolutely no sense to me, but I haven’t see the correct strut yet either……Hey honey, I can’t believe how great this FWD RX330 handles in the snow!  It almost handles like it is an AWD………. 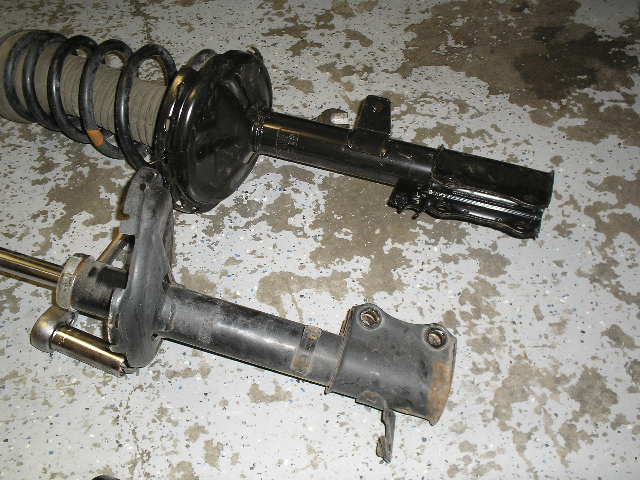 The passenger side fit much better 🙂 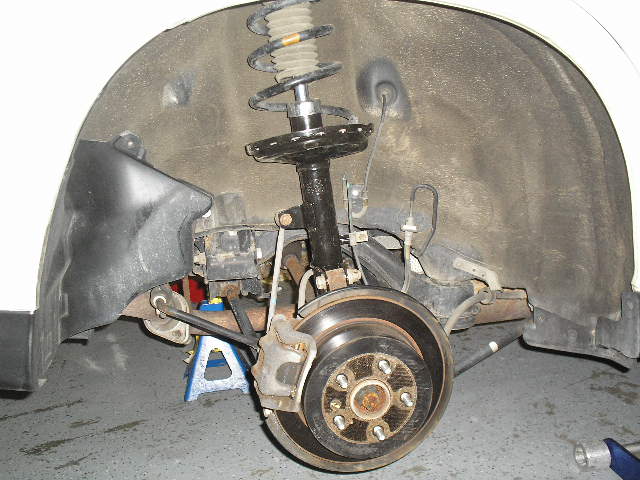 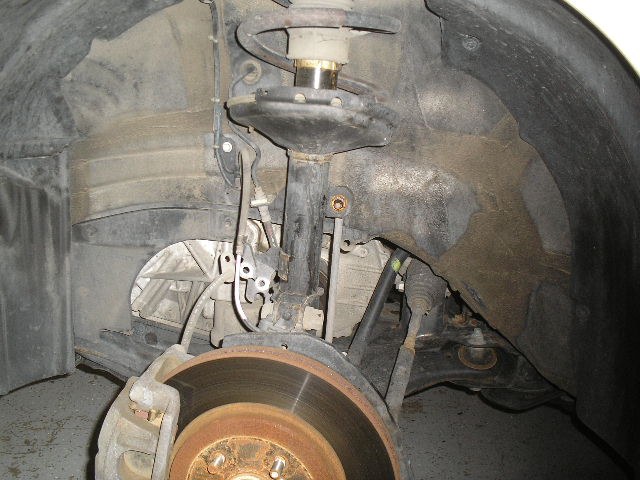 New front strut. Back to saying the struts are easy to get out………and a SON OF A BITCH to swap springs and strut housings. It appears that the springs expand to about 6 times their compressed length (I am honestly too lazy to use spring compressors when disassembling struts as the porsche stuff really doesn’t expand much….big mistake).  If you just use an impact to pop the top nut off, the duration of flight for the strut is about 3.5 seconds.  Point away, hit the trigger, brace yourself, walk away….point away, hit the trigger, brace yourself, walk away.  So the second strut I was smart enough to use spring compressors for the diassembly.  This is where I figured out that the damn strut shaft actually retracts in to the housing about 3 inches once you pop off the top nut, making it really hard to get everything assembled back together. It was like that stupid arcade game where you try and knock the gopher on the head with the padded hammer…..but before you can hit it, the little bastard pops down the hole……Every time you try and get the nut on the shaft, the little bastard pops back down the hole.  Pop the top nut off, shaft retracts about 4 inches….huh….that can’t be good.  It required 2 extra spring compressors as well as my pair to compress the springs far enough to get it back together.  By the way, don’t use the spring compressors from oreilly’s near my house…they don’t work very well anymore, lol.  The trick I figured out was the have someone pull the strut out completely and hold it extended…..then take a paper towel or rag, and at the base of the shaft, put wrap the rag around the shaft and put on a hose clamp to keep the shaft from retracting. Then assembled the components and lastely remove the hose clamp. PITA. 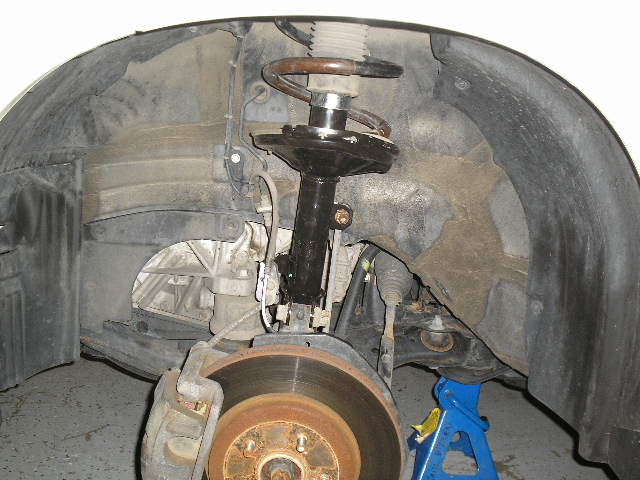